Fans of ABC’s Grey’s Anatomy learned this month that the medical drama will be absent its lead star for most of the upcoming 19th season: Ellen Pompeo (Meredith Grey) will only appear in eight of the season’s episodes, though she’ll still remain the show’s narrator and one of its executive producers.

But Pompeo isn’t resting on her laurels — laurels that, by the way, include multiple People’s Choice Awards, a Golden Globe nomination, and a contract reportedly worth as much as $20 million per year. Instead, she’ll star in a Hulu limited series that dramatizes the true story about American parents who claimed their adopted daughter from Ukraine was actually an adult “sociopath.”

The untitled Hulu project will mark the first time since 2005 that Pompeo’s fans have seen the 52-year-old play anyone except Meredith Grey (aside from her cameo in a Taylor Swift video, of course). And from what Pompeo told The Hollywood Reporter in 2018, it seems she was contractually forbidden from acting elsewhere: “I don’t get to do anything else, and that’s frustrating for me creatively. I make 24 episodes of TV a year, and as part of this deal, I cannot appear anywhere else.”

Here, in chronological order, are highlights from Pompeo’s non-Grey’s Anatomy filmography, including parts that had her sharing the screen with Leonardo DiCaprio, Ben Affleck, Jim Carrey, and a couple of Friends.

Pompeo made two guest-starring appearances in the NBC procedural, including her role as Jenna in 1996’s “Savior,” a teen whose family is murdered. (And check out Pompeo’s future Grey’s costar Brooke Smith questioning her in the courtroom.)

Pompeo scored her first major film role in this romantic drama, playing a postal service employee who helps Jake Gyllenhaal’s character rescind wedding invitations after his fiancée is murdered — and, yes, becomes a love interest for him.

Pompeo played secretary to Ben Affleck’s Matt Murdock, Daredevil’s diurnal alter-ego, in this 2003 superhero film. (Coincidentally, both Daredevil and Catch Me If You Can also featured Jennifer Garner, and Pompeo was once in consideration for part on Garner’s ABC show Alias.)

In this immortal NBC sitcom, Pompeo guest-starred in the episode “The One Where the Stripper Cries,” playing an old college crush of both Ross (David Schwimmer) and Chandler (Matthew Perry).

Naomi in Eternal Sunshine of the Spotless Mind (2004)

Taylor Swift has cats named Meredith Grey and Olivia Benson, so it’s not surprising the pop star enlisted both Pompeo and Mariska Hargitay to strut side-by-side as two members of her “Bad Blood” squad. Pompeo’s character is named Luna, likely a reference to daughter Stella Luna.

In an episode of this Disney Junior show, Pompeo voiced a “cat’s meow” of a stuffed animal, who’s distressed that her whiskers are bent on the same day she’s supposed to make an appearance at her owner’s school. 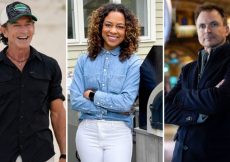 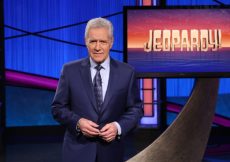 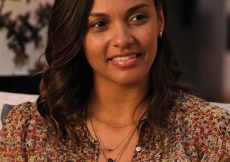 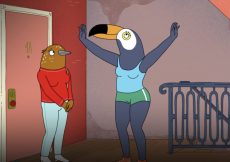 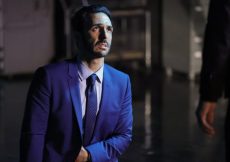 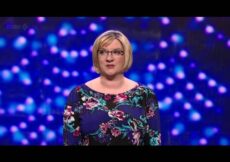